Can any group be made into a team, and if so, how?
Counter question: why should one do this?

What is a team?

To be a team means to listen to each other when discussing the best way to reach the goal, to get involved with each other, to act together and to take the common goal more important than your own ego. So intense that it’s fun to fight together for the best solution, to rely blindly on each other, and to play together like a ballet or orchestra. It takes time and perseverance and strength, and you have to want it.

There is only one reason to take it all on, to make a team out of a group. This is a concrete task that has to be done together in a division of labor. Then it makes a lot of sense to agree on how to optimize workflows, processes and structures, on the competencies, tasks and roles of everyone involved, and on the meaning and purpose of the task. It doesn’t matter whether this involves work or leisure. Even the neighborhood gardening circle or the alumni volleyball team can be a great team. Or ‘just’ a cool clique that you like to hang out with, without being obligated to the others in any way.

The common task is at the same time the prerequisite for this exhausting process. After all, why should I get involved with others, discuss values and goals with them, and agree on procedures if there is nothing we want to do together?

Wanting it too is not only a key advantage, it is actually the second prerequisite that this effort will work. [Anyone who has ever half-heartedly set out to lose weight or exercise knows what I’m talking about].

First, some shock news: all groups develop according to certain patterns, whether you like it or not. If you let the development from the outside and the inside run free, what happens is what Bruce Tuckman described with his team phases.

In phase 1 [FORMING – WHO ARE THEY?] nobody knows anybody, everybody wonders who the others are and tries to find out. Tasks are only used to put themselves in perspective and check out the others, the outcome is secondary.

In Phase 2 [STORMING – WHERE DO I STAY?], when you have roughly an idea of who the others are, what makes them tick, what they’re good for, and how reliable, it’s all about taking your rightful place in the group. The tasks are still a means to an end, no one should expect much from the results yet. Hot discussions about being right.

Only from phase 3 [NORMING – ME AND THEM!] it is about the solutions themselves. One tries to arrange and position oneself in smaller groups. Values and norms, principles and rules for working together are established. This can be quite rough and usually the first thing you do when you make a mistake is look for the culprit, often it’s always the same one. Hot discussions for one’s own solution.

You can only call it a team when phase 4 [Performing – We!] is reached. The highest criterion is now the solution of the task, everyone contributes as well as they can and is accepted as such. The hat is always on the best person for the job at that moment. Hot discussions for the best solution.

How long it takes from phase 1-4 is decided by the social, communicative and professional competence of all group members. In particular, it depends on their personal maturity whether the journey goes to phase 4 or turns off somewhere before that. [A dictatorship is also the result of an evolution and demagogues are elected by their followers].

Tuckman later added a 5th phase and for me there is still a phase 0, I’ll get to that below. Now first to the question of how you can positively influence this process and whether you should.

Simply put – Yes, if you know and recognize the patterns and understand how to act accordingly! If you take a closer look at the 4 team phases, it quickly becomes clear that the team members have different needs and options for action in each phase.

An insightful tool for this would be Delegation Poker by Jurgen Appelo – a stage model of the team’s participation in decisions. It ranges from “boss decides and informs team” through 5 intermediate steps to “boss asks how team decided”.

Which of the 7 options fits best to which team phase and where would it rather produce anything between chaos, incomprehension and resistance?

Those who know the changing interplay of orientation and freedom can support appropriately, otherwise the group will be over- or under-managed.

Patrick Lencioni approached the question from a different perspective. What has been missing from teams that have failed, what needs of team members have not been met? The result was his “5 Dysfunctions of a Team”:

Put positively, it’s about building trust or psychological safety, a culture of conflict, commitment, taking responsibility, and an orientation toward achieving results. And – no big surprise – each element is a prerequisite for working successfully at the next level. Everything stands and falls with trust in each other and in the environment. 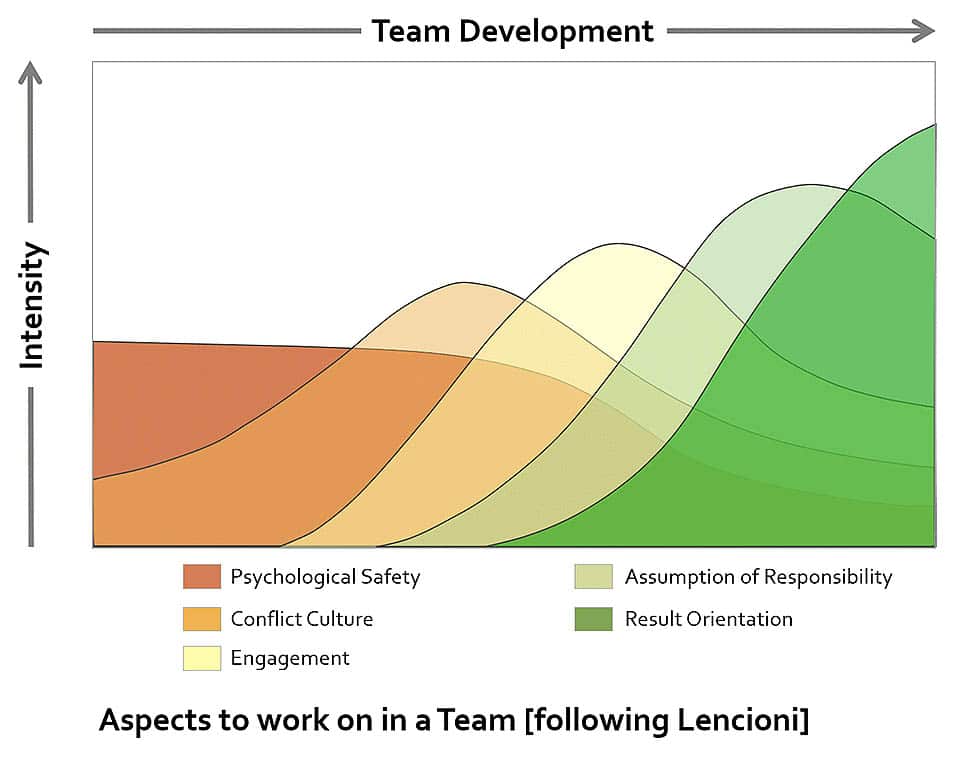 It is not without reason that the graphic resembles the pattern Maslow used to describe the relationship between basic human needs.[By the way, the well-known arrangement of the needs as a pyramid does not originate from Maslow’s hand, the approach was too mechanistic for him].

The importance of a need recedes with its satisfaction and allows going to the next higher level, from physiological subsistence to self-development. However, at the moment a more basic need is threatened, work on those based on it is scaled back. [At the beginning of the Corona crisis, toilet paper was hoarded. In wartime situations, it’s all about sheer survival, until all values and norms are forfeited].

The inner dynamics of a team

With a snap of the fingers, the trust in the team or the team to the environment can be destroyed and everything is back to square one. But for the state of a team to change, it doesn’t even need these serious events, because a team, understood as a living organism, is constantly in motion, every input has an effect:

I would recommend scheduling another Phase 0 [WONDERING – WHAT’S GOING ON?] as a communication challenge. It runs during the time from the first decision for a project on management level to the official launch. Something always leaks out and missing information is quickly replaced by wild speculation that can complicate the launch considerably.

Who can accompany the team on this journey?

This can be done from the outside, as a classic supervisor, as a team leader. When he embarks on this journey with his team, he must be able to let go, to let the team go. If he already knows the journey, then “holding on” will never be an option for him.

[Good movies for this are “Coach Carter” with Samuel L. Jackson and “Against Every Rule” with Denzel Washington, both of which take on the task of turning a bunch of pubescent boys into a successful basketball and football team respectively, both stories with real backgrounds].

If the mandate is not as clear from the beginning as it is with the Scrum Master, then there is still the possibility that the team recognises the technical and especially leadership competence of a person and gives him the mandate. You develop this role, you recommend yourself for it through your actions.

[Good movies for this are “The Last Fortress”, in which Robert Redford as Lieutenant Irwin, inmate of a military prison, leads a revolt against the unscrupulous prison warden. Or “Gladiator” with Russel Crowe from the moment the tribune organizes the fight in the Colosseum].

That someone coaches a team from behind all the time to top performance without being recognised and “promoted” I think is unlikely. In movies, it’s more likely to be outsiders who put others on the right track through seemingly silly or random remarks.

What personal prerequisites someone needs in order to support team development will be discussed here in the blog soon.

Conrad Giller has published a series of posts here on the blog titled “Survival Training for Agile Samurai“. It is the motto of his Agile Night School. There he offers workshops and trainings on communication and social skills for leading and developing teams, as well as working in the New World. 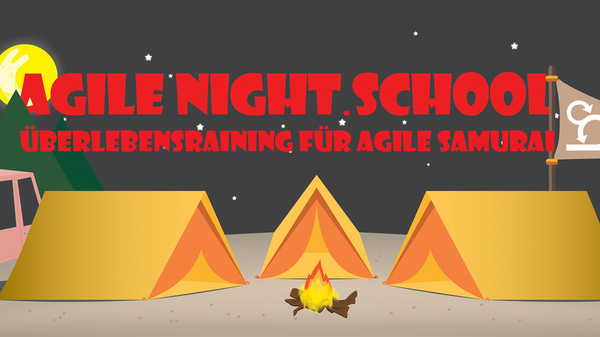 We are also happy to recommend the Communication.Cards by Conrad Giller. They help to playfully change established language patterns in order to better shape discussions. An infinite number of tips, great quotes and a great feel – definitely a good tip for people who speak German.

Conrad Giller has published more posts in the t2informatik Blog: 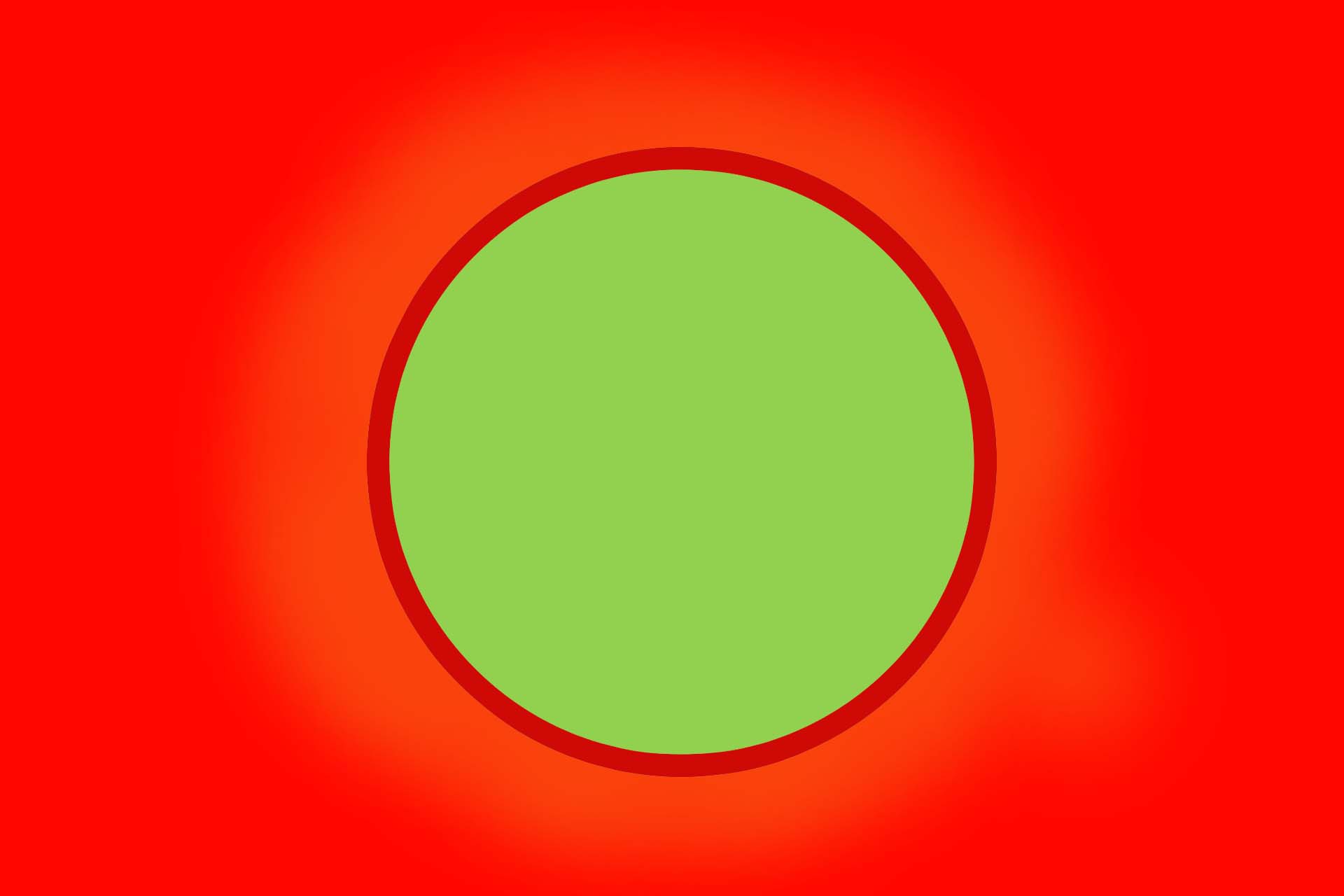 Consensus, consent or what? 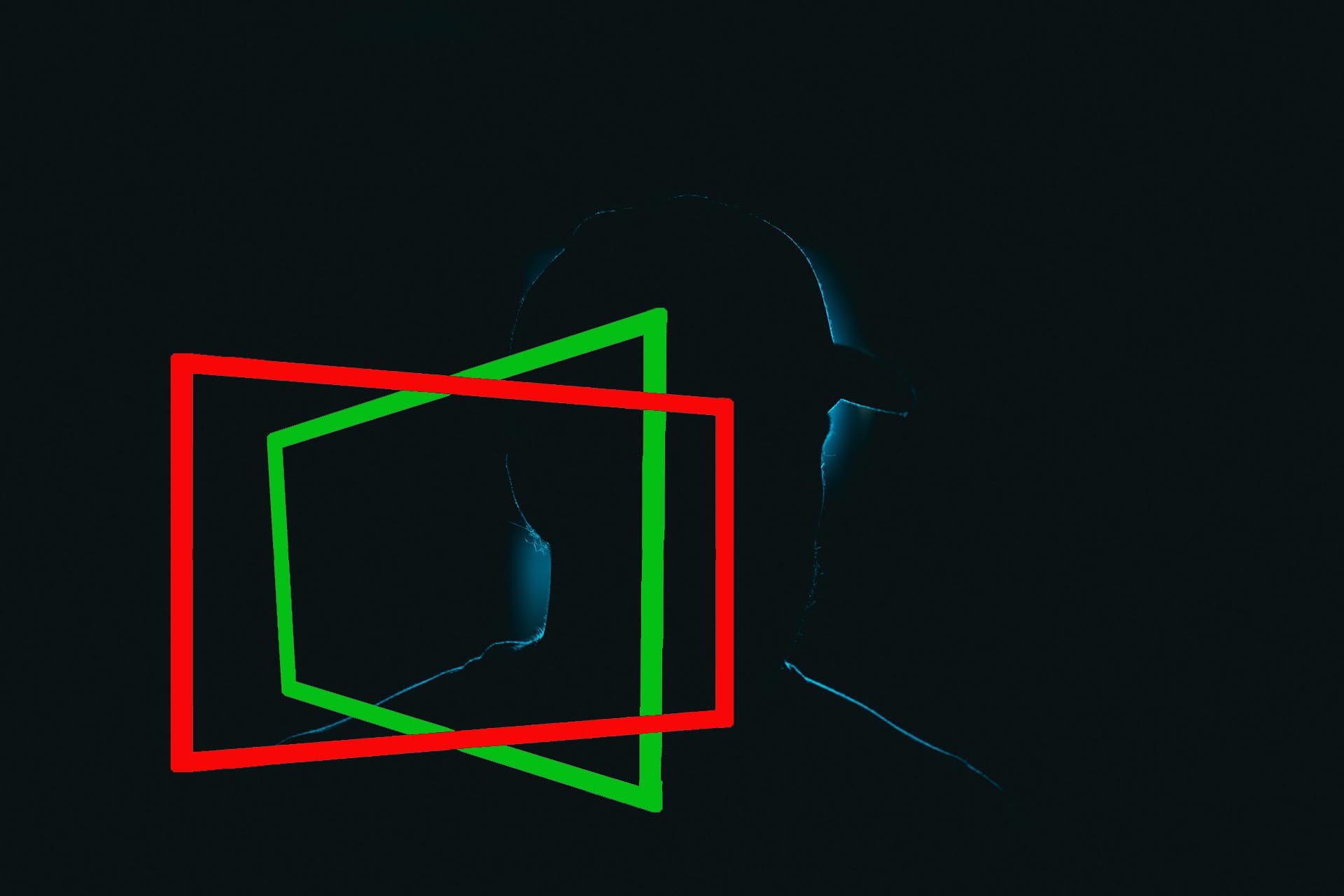 People ar quite different, aren’t they? 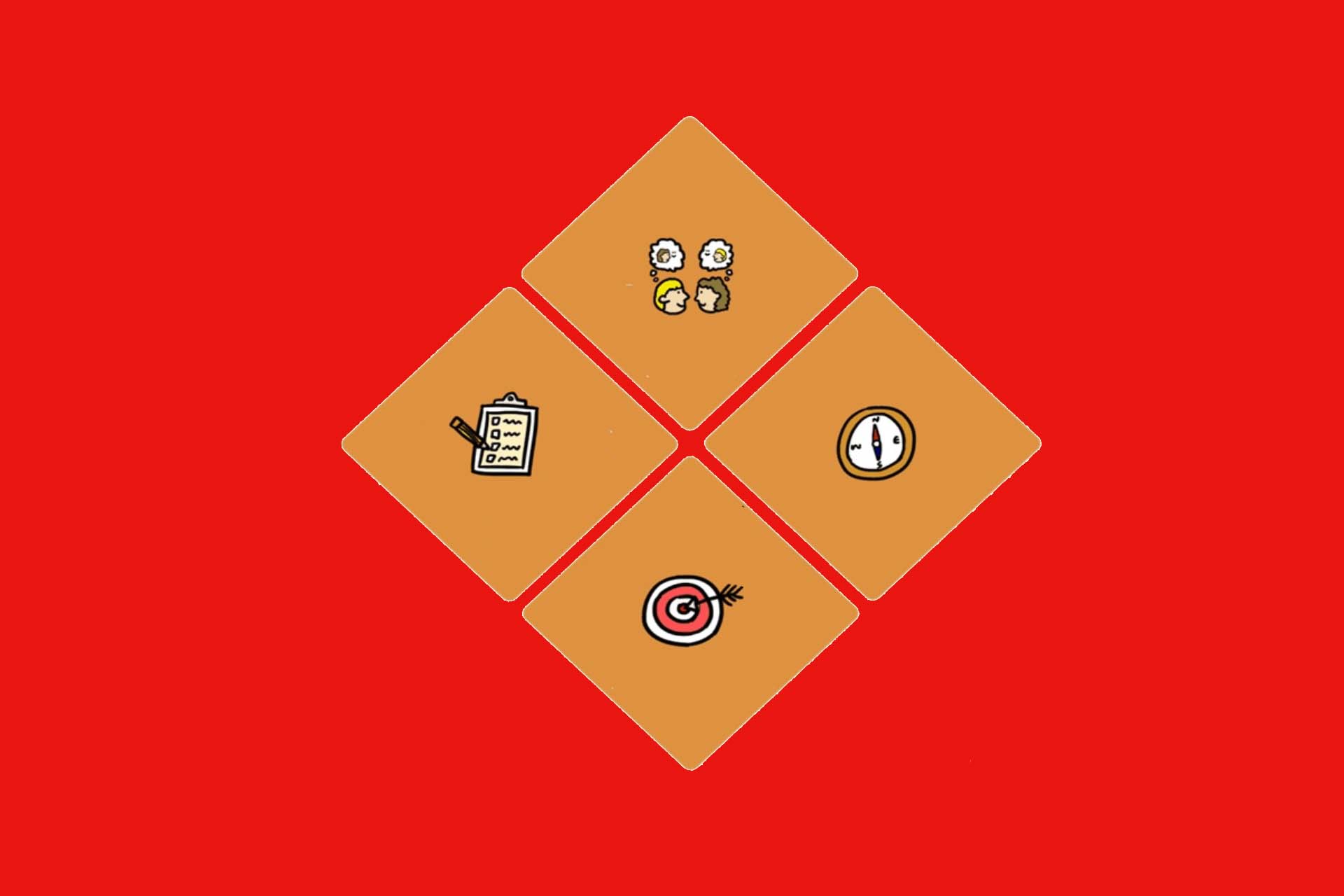 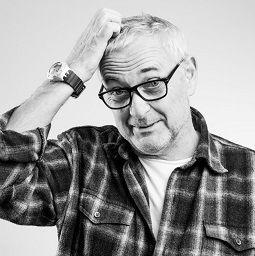 Conrad Giller has been working for about 30 years as a trainer, coach and consultant for almost all challenges of oral communication: conflict, team, leadership, storytelling, presenting, moderating, media, etc. He is happy to pass on his experience online and offline in workshops.