Knowledge at a glance: The YAGNI Principle requires that speculative programming be omitted and features implemented only when they are really needed. YAGNI stands for You Ain't Gonna Need It.

Only implement features that are really needed

YAGNI is an acronym and stands for “You Ain’t Gonna Need It”. It addresses developers who like to think ahead and program additional features, assuming they will need them at a later date. The YAGNI Principle was developed in the context of Extreme Programming (XP) and demands to stop this common practice and to implement only those features that were actually needed, discussed or commissioned.

Reasons for the deviation from the YAGNI Principle

There are a number of reasons why developers implement features that are not needed today. One reason for the deviation from YAGNI lies in requirements engineering or requirements management. The better the requirements management works, the less effort is required due to ambiguity, incompleteness or interpretation. Otherwise the following can easily happen:

There are also a number of other reasons that contribute to the deviation from the YAGNI Principle:

The YAGNI and KISS Principles

The YAGNI Principle and the KISS Principle complement each other. The KISS Principle – Keep It Simple and Stupid – looks for the simplest possible solution to a problem. “Everyone can do complicated”, but the art lies in the simplicity of a solution. The YAGNI Principle complements KISS by asking the question “do we really need this” and thus steering the answer in the direction of avoiding effort. So it can happen for example that

Nevertheless, it can of course make sense to answer a question about “do we really need this” with “yes” as well. Ideally, this should be discussed and agreed with the team, the product owner, the project manager, the product manager and, if necessary, the customer. And of course it also happens regularly that development teams become smarter in the course of a development and say to themselves, “If we had done it differently back then, it would work faster and easier today”. This can result in expenses and costs in the form of refactorings. However, this can never be a request to implement features on “suspicion”.

Factors in the YAGNI Principle

Which factors or questions are there in the course of the YAGNI principle that support developers in making the right decision? Here is a selection:

Often such questions cannot be answered immediately. One of the reasons for this is that statements about the future are fundamentally difficult and cannot be easily quantified. This is another reason why it makes sense to coordinate with colleagues and make a good decision together. In agile developments, for example, Sprint Planning 2 can be used.

Advantages of the YAGNI Principle

If only those requirements are realised which have to be implemented clearly, there are some advantages: 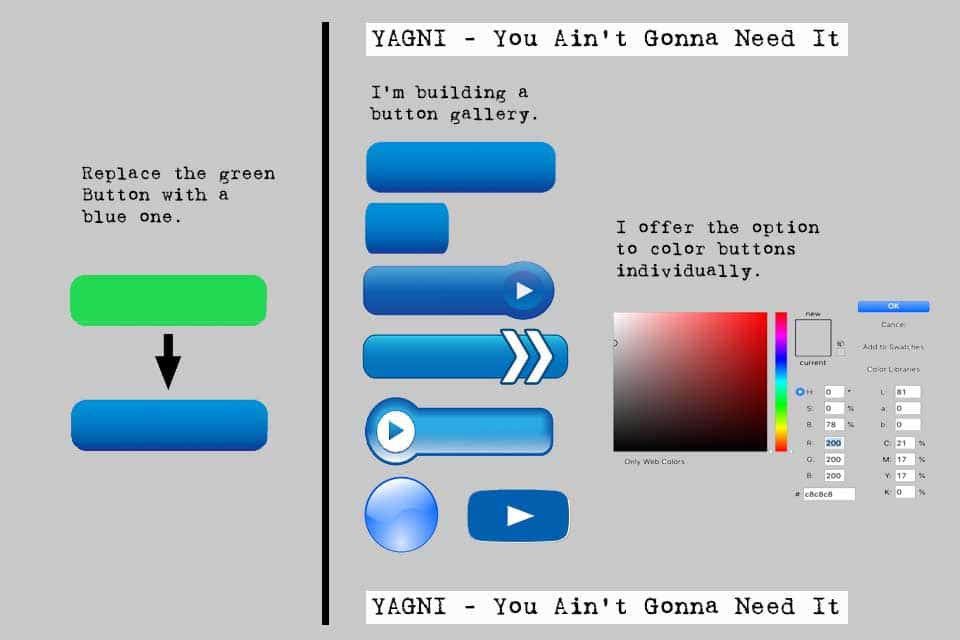 When using the YAGNI Principle, the combination with other principles and techniques such as refactoring, automated testing and continuous integration can be used.
Here you will find an article about the best process in requirements management.