What is a Pareto Chart, what should be taken into account for visualisation and what is the purpose?

Knowledge at a glance: A Pareto Chart is a bar chart that arranges categorised factors according to their significance and frequency and presents them in descending order relative to each other.

The display of problem causes sorted by their importance

A Pareto Chart is a bar chart that orders factors according to their importance and frequency. It goes back to the Italian engineer, economist and sociologist Vilfredo Pareto, who recognized that a small number of high values of a defined set of values contributes more to its total value than a large number of small values. This is often referred to as an 80-20 rule or the Pareto principle.

The visualisation in the Pareto Chart

The Pareto Chart  visualizes the distribution of the factors by

Here you can see a simple Pareto Chart with an axis of the added percentage category shares and an axis with the corresponding categories sorted by their percentage share. 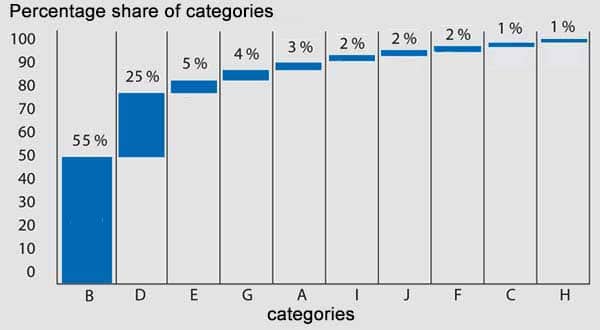 The purpose of the Pareto Chart

In principle, data should be visualized in a Pareto diagram in a relatively simple and clear manner. The purpose is to quickly recognize the meaning of a problem or the effects of an error. If this is successful, it is a good tool for error and problem analysis. According to Vilfredo Pareto, an organization should then address the biggest problems and eliminate about 80% of all cases as quickly as possible (in this example, categories B and D).