Projects are by definition something unique. DIN 69901, which describes the principles, processes, process models, methods, data, data models and terms used in project management, defines an undertaking as “a project that is essentially characterised by the uniqueness but also by the constancy of the conditions in its entirety, such as objectives, time, financial, personnel and other limitations; differentiation from other projects; project-specific organisation.” Although projects are unique, there are tools for project planning and project implementation that can be very useful: checklists. With checklists, work steps can be structured and documented. They offer orientation when completing tasks or designing solutions. And they are useful as a reminder, because they help not to forget anything. Nevertheless, there are organisations that do not use checklists in their projects? Why is that?

I’m a fan of checklists. Perhaps I can make checklists appealing to you by taking a look at another area: aviation. The checklist in aviation is a list of instructions that pilots use before take-off and also during the flight. Its use is mandatory, because it lists activities and checks to be carried out, which must be carried out in a specified order. Probably most pilots know the checklist – known as the clear list in technical jargon – by heart, but they are still obliged to read the instructions aloud before each flight. Especially in exceptional or emergency situations, the checklist has a very high value, because it ensures that despite all the routine of the pilots in a stressful situation, essential measures are not forgotten. Failure to do so can have terrible consequences, as recently happened when an aircraft crashed near Moscow. First evaluations of the flight recorder showed that when the Antonov An-148 took off, the instrument heating of all three measuring instruments was switched off. According to the investigating authority, this probably led to icing of the speedometers and subsequently to incorrect and contradictory data on the speed of the aircraft. All 71 passengers and board members were killed in the crash on February 11, 2018.

Fortunately, there are other examples from the aviation industry that turn out much better. Do you remember the spectacular emergency landing of an Airbus aircraft on the Hudson River in New York? Flight AWE 1549 was scheduled to leave New York’s LaGuardia Airport for Seattle on January 15, 2009. The pilot of the aircraft, Chesley Sullenberger, subsequently described the use of the emergency checklist in an interview with Air & Space¹ as follows:

Air & Space: „Does the Airbus operator’s manual have a procedure for ditching?“

Air & Space: „So your first officer would have found that procedure and had a checklist to go through for the ditching procedure?“

The use of checklists therefore offers valuable advantages, but the structure and scope can be decisive for life and limb depending on the sector and emergency situation.

In addition to aviation, there are many other areas such as reactor safety, flood, avalanche or earthquake protection where checklists are of great importance. Checklists are also increasingly used in surgery. The World Health Organization (WHO) has developed a checklist for the safety of surgical care, because safe surgery saves lives. The checklist identifies three phases of an operation, each corresponding to a certain period of time in the normal course of work: before induction of anaesthesia, before skin incision and before patient leaves operating room.

At each stage, a checklist coordinator must confirm that the surgical team has completed the listed tasks before proceeding with the operation. The manual contains suggestions on how to implement the checklist, taking into account local conditions, of course. The Implementation Manual is intended to ensure that surgical teams can implement the checklist consistently. Through this checklist, healthcare professionals can minimise the most common and avoidable risks that threaten the life and well-being of surgical patients.

Atul Gawande, US physician, university lecturer and surgeon, who is known for several bestsellers about the daily practice of medicine, quantifies the success of the checklist as follows: “When introductions were made before a surgery, the average number of complications and deaths dipped by 35 percent.”² Impressive, isn’t it? 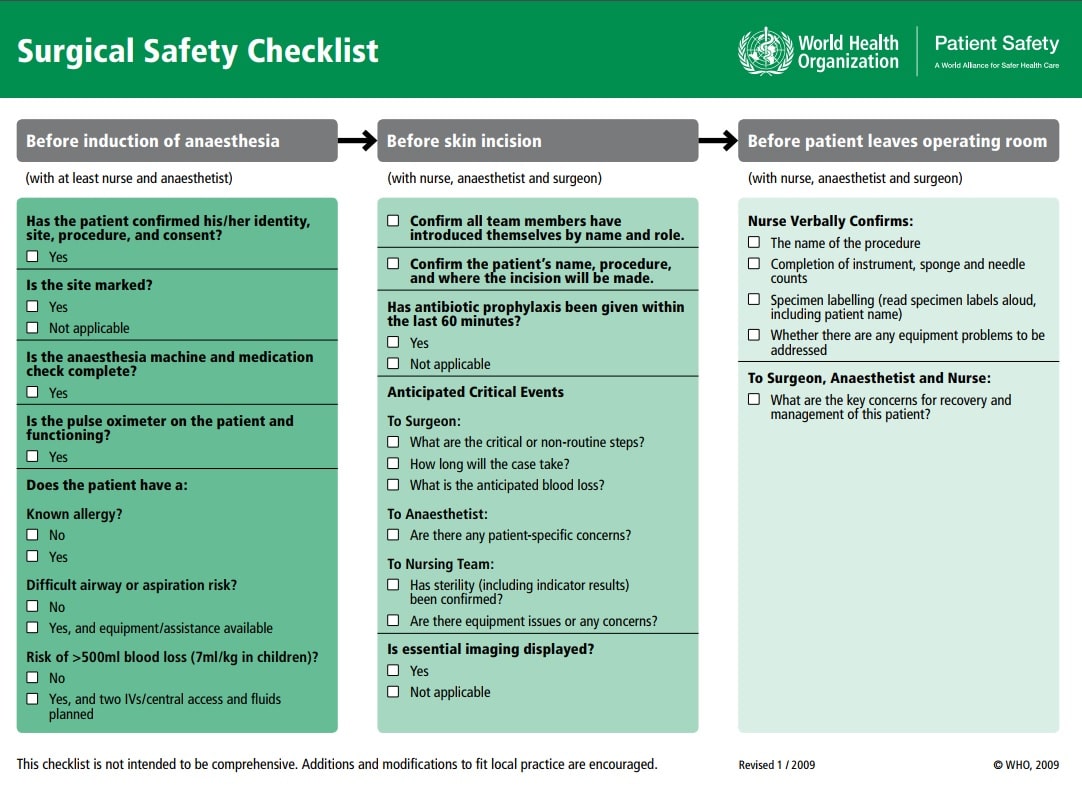 The WHO Surgery Safety Checklist

What does this mean for projects? Or to put it another way: In which areas of project management can you use checklists effectively?

The use of checklists in project management

In many companies there are defined standards, workflows or process models that are used in projects. Checklists can help to transport corresponding specifications into the projects in order to give those involved concrete reference and orientation points depending on their roles and tasks. For example, repetitive processes could be processed more easily at the start of a project, agreed documents could be generated more quickly when milestones or quality gates are reached, risks could be more easily identified or communication with important stakeholders could be better structured. The application possibilities are manifold.

Of course there are also reservations against the use of checklists. Organisations often make the mistake of overburdening project participants with checklists. Checklists are equated with bureaucracy and this at least leads to a perceived restriction of the employees’ flexibility. A checklist should therefore be a tool, not a dogma. The structure and content of a checklist may – no, they must even be questioned. Just as organisations want to optimise cooperation over time, checklists should also be checked for sense and nonsense, for scope, structure and time expenditure. Rarely do projects deal with decisions in a few seconds as Chesley Sullenberger did.

The acceptance of checklists increases with high probability if there is a serious discussion of the advantages and disadvantages. This leads to useful checklists – useful in terms of structure and content, but also in terms of deployment scenario and timing. This is especially true for organisations that carry out many different types of projects.

A methodical example from PRINCE2

Do you know PRINCE2? PRINCE2 is a method for the management and implementation of projects of all types, characteristics, duration and scope. In the description of the PRINCE2 model of AXELOS – a Health Check is described. The Health Check supports project managers in complying with all essential aspects of PRINCE2. The Health-Check is therefore nothing more than a checklist with the following 14 main questions:

These 14 questions need to be answered in the preparation of a project. Of course, it is possible to answer all questions with “Yes” or “No” only, but this would not be sufficient for good project documentation; especially in the case of a “No” it should be noted why there is no defined result for the question. A project without a business case or without at least an approximate idea of the final product could be doomed to failure even before the project has started.

For me, the Health Check is a good example of the advantages of using checklists. Would you have considered all points when preparing a project? Checklists ensure that aspects are not forgotten. They ensure that work processes are structured. In concrete cases, the Health Check can also be used for diagnosis, for example as a project assessment, as a check of the existing documentation or also for the identification of possible weak points.

Checklists can be very useful when planning and implementing projects. They can be used in many areas, in a wide variety of projects and in different project phases. They can help to understand the initial situation of a project. They can be used for problem, cause, risk or cost-benefit analyses. Checklists can also be used for organising projects, such as staffing the project team, structuring group or individual discussions, in the event of premature project termination or when the project is concluded with the dissolution of the project team. There are many possibilities and areas of application.

It is important to note that checklists are intended to facilitate work in projects. They should neither limit the flexibility of the project participants nor lead to bureaucratic overhead. To achieve this, it is necessary to regularly review checklists and to change, reduce, expand or even discard them. A checklist thus has its own life cycle – just like the project itself. 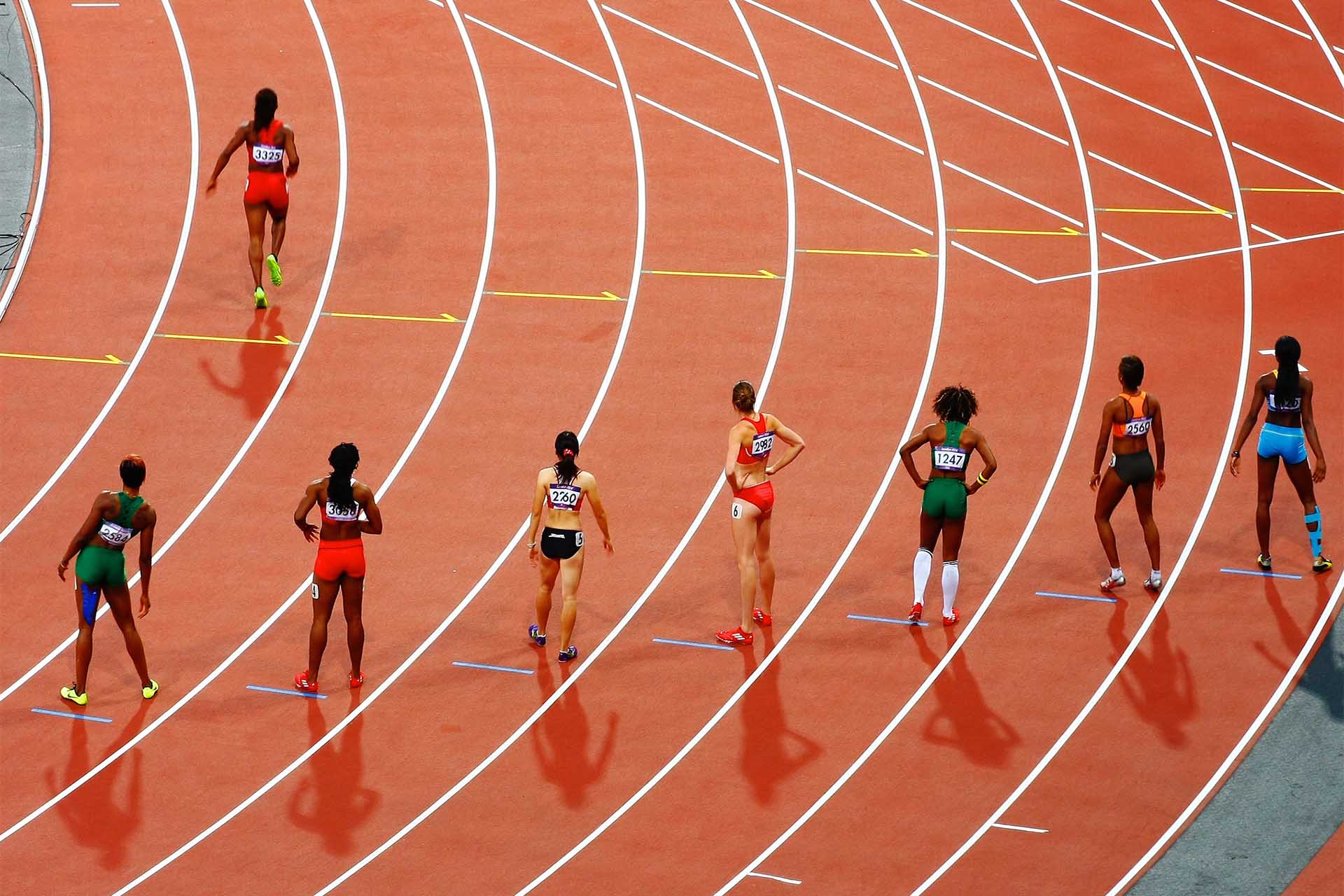