A term has made a steep career in the working world in recent years: New Work. If you google the term, you will receive 26.8 million (sic!) hits in 0.57 seconds (as of 17.05.2018). Digitisation, however, only to 5.25 million, digital transformation just to 514,000 and even the repeatedly invoked shortage of skilled workers comes across as a narrow-hearted comparison: 1.73 million. New Work thus leads the list of current hype terms and buzzwords by far.

In view of these results, the only question that arises is what is meant by this? In order to clarify this and give the term some substance, it is helpful to take a look at the history of its origins, as is often the case.

History of the New Work concept

According to general understanding, the term comes from the German-born Austrian-American philosopher Frithjof Bergmann. After visiting some countries of the former Eastern Bloc between 1976 and 1979, he realised that sooner or later the real existing socialism was coming to an end. This gave rise to the idea of designing an alternative model to communism and capitalism. The term in Bergmann’s original version means three aspects:

The starting point for Bergmann was his observation and assessment that many of us, perhaps most of us, in their current daily work do not do what they “really, really want” to do. There are several reasons for this:

First, even today, not everyone can choose what they want to do for a living. In theory, yes, but in practice, it is particularly evident in Germany that demographic origin has a considerable influence on education. In other words, if you have the “wrong” parents, you cannot become a doctor or data scientist. Exceptions confirm the rule.

Secondly, in 99% of all cases work is outsourced. Most of us are only allowed – if at all – to make operative decisions of minor importance by choosing where to work and when to work with which tools. In which projects you work with which colleagues and which direction the company takes, is usually not up to your creative power.

Thirdly, most of us have to accept the rules of capitalism and its markets in our daily work, whether we like it or not. Simply because – understandably – most employers submit to these rules and do not invent new rules and make them socially acceptable.

That is why classical wage labour should be reduced in order to emancipate oneself from this foreign rule.

Finding and doing work that I really, really want to do

For most of us, this second building block, as described above, means that we do not do what we really, really want in our contract work on a large scale. Too many people drag themselves dull or even against resistance to work. If this is to be reduced, the financial deficit must be compensated for elsewhere, unless we also want to reduce our standard of living by about half.

And even if we had the same educational opportunities, it would not be guaranteed that everyone knows what he or she really wants (Bergmann invented the term self-ignorance). At the beginning of vocational training, we often do not know what we want and do not have the slightest idea of the consequences of a profession. I would claim a high degree of self-reflection and self-awareness. And yet it was not clear to me what my profession as a music therapist, which I learned many years ago, entails. In the end, it was precisely those aspects that were not clear to me before that prompted me later to no longer want to pursue this profession. So there is a need for much greater support from people who will be working in the future to find out what they really, really want. This applies today more than ever in the upheaval of digital transformation, because many professions will disappear in the future, a lot will change substantially and many completely new ones will only be invented and developed in the coming years and decades.

Assuming we were all doing the work we really, really want to do, what would that achieve? Why should that be desirable at all? There is no universal answer to that. From my point of view, it is a question of justice that it is not only the educated elite who enjoy the joy or even happiness of working. This is especially true since we spend a large part of our lives with our work. So why should we be permanently dissatisfied or unhappy at work, only to compensate for this at our own expense in our sparse leisure time?

Here Bergmann was far ahead of his time. His original concept of New Work also included a possible solution to some of the problems we are experiencing today as a result of far-reaching globalization with transnational production and supply chains. Global networking is highly crisis-prone, while local economies are quite crisis-resistant. When a second tailor used to open his shop in the village, he had to do his job under the same market conditions as I did. But if today solar panels are suddenly produced in China as well as in Germany, then they are much cheaper, because a few thousand kilometres away completely different production costs arise. And this has fatal consequences, which for example the former Wagner Solar GmbH & Co KG felt until the insolvency (described in detail in my last book „Alle Macht für niemand. Aufbruch der Unternehmensdemokraten.“, pp. 185-196).

But Bergmann didn’t reduce his idea to an ecological self-production, in which we all start to grow our vegetables in the kitchen or in the garden and sew and mend our clothes ourselves again (although Bergmann and his colleagues certainly experimented in this area as well). That is helpful, but he was interested in more. Hence the high-tech self-production. He foresaw the possibilities of local, mobile production possibilities early on, with which we would not only be able to produce our own food in the future, but also produce technical products ourselves. If I print out my running shoes myself in the future, I will not be dependent on production sites anywhere in the Far East, nor on a supply chain covering thousands of kilometres. In fact, Bergmann and his employees worldwide were invited to this part of New Work projects and met with many open ears.

And what is called New Work today? Often it is an incomprehensible reduction to free choice in the operative decision-making space, which is tantamount to mutilation: workplace, working time and work equipment. In the context of New Work, the home office and its alleged many advantages are often swaggered in the same way as trust-based working hours. And sometimes the point is that the new salvation would also be to be able to choose freely between an Android or Apple mobile phone. Work equipment in particular is a popular, widespread topic. The New Work then deals with social collaboration tools such as slack or enterprise social networks. There’s no question that these tools are also changing the way we work, but they are missing the core of the original idea.

Another young standard narrative is the dismantling of hierarchical levels to the point of an allegedly non-hierarchical company. Apart from the fact that the latter is counterfactual nonsense anyway, because the dismantling of formal hierarchies always leads to the development of informal hierarchies, as organisational research has shown for years, the real problem is not that hierarchies exist, but that they are formally fixed. In other words, leadership does not emerge in the way that would be best for the company in question, but in the way that the respective career path provides for it. And then there is virtually no urgently needed flexibility in the necessary roles with the appropriate decision-making powers.

And then there is the demand for a sense of purpose. Wonderful! It is a mystery to me how another person wants to give me meaning. What I experience as meaningful can not only be decided by me, it is 100 percent up to me. There is no way around it. Because only I know my sense of life and have a direct influence on it.

The ultimate peak of naivety and conceptual confusion is to regard New Work as a synonym for coworking. At the same time it is suppressed that the original idea of coworking has long since been forgotten and coworking providers are often nothing more than flexible landlords of office space and seminar rooms for (large) companies. Who often sits in coworking spaces knows: Even in the open areas there is usually a horde of freelancers or employees who barricade themselves behind active noise cancellation headphones and do not want (or are not allowed) to co-work.

Our meaning of New Work

I am writing here on behalf of the team from priomy, our company in the process of being founded, a platform for self-determined work. Therefore it is not “my meaning”. We take the liberty of understanding the term a little differently from Bergmann: New Work means to design work in such a way that those employees who want to work self-determined can do so. And to anchor the associated organisational structure and culture in a binding manner and not, like a fashionable wave, to put an end to the next hype of centralisation. 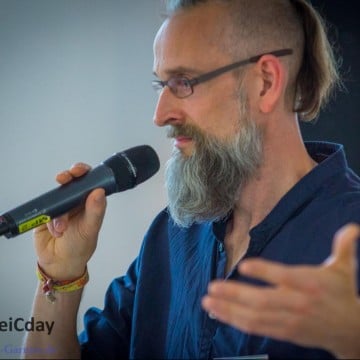