Shifting Mindsets – is that even possible?

Categories of change
What exactly is a mindset?
With determination to success?
The errors of rational consciousness
The development of consciousness
Second-tier thinking is the solution
Failure due to wrong level of abstraction
Second order solutions
Shifting Mindsets works
Conclusion

Change processes are difficult, which is why most fail. The rate of failure of 70-80% in entrepreneurial change processes is even better than all the figures on the private issues of “losing weight”, “healthy eating”, “stopping smoking” or “doing more sport”.

In this situation one must assume that there are systemic errors in thinking. The first one we can uncover at this point, it is the equation of change and transformation. Change Management is the collective term for approaches to change of individuals, teams and organisations. It does not make any statement about the level of abstraction of the changes.

First order changes, also called translations, are quantitative changes within a system. They expand the repertoire of knowledge and skills. Software development is a first-order change, which is complex (too complicated in distinction), but nevertheless much less challenging than a second-order change.

Transformations mean the qualitative change of the system, it is vertical growth, which requires an update of the way of thinking and the value system. This means a paradigm shift or a change of consciousness. It is obvious that changing the mindset requires different approaches than translation.

Both categories of change require an understanding of complexity, dealing with emergence, dynamics, contradictions, interactions and circular logic (synchronicity). These terms are not found in any of Lewin, Kotter or Krüger’s standard change management models. They assume linear, causal processes, which identifies the second systemic error in thinking.

What exactly is a mindset?

Let’s take a look at the term “mindset”. It includes following aspects (without claiming to be complete):

Already at first sight it becomes clear that a substantial part of these aspects is not effective in the conscious but in the unconscious. How should it be possible to change something that is not conscious? We have found the third systemic error in thinking!

With determination to success?

Achieving goals through rational thinking: You define a goal (target state), plan the milestones and …fail, because there are several errors in this approach:

The errors of rational consciousness

All the above-mentioned errors in thinking have one thing in common, they originate on the left, rational-analytical side of our brain, the mind. They ignore complexity, liveliness and subjectivity. This is an expression of the rational structure of consciousness, which is currently dominant and which needs to be transformed in order to be able to deal with complexity with confidence.

From both consciousness research and cybernetics we have the insight that the control of a system must be more complex than the system to be controlled. Here is the real reason for the widespread failure of change processes. The approaches are not more complex than the problems. Included in this is agility, because agility is also only a reaction to complexity, not a sovereign handling. In medicine it would be called symptom treatment.

The development of consciousness

He identified six levels of consciousness that develop in a spiral of increasing complexity and which he grouped into one category. The significance of the first-tier levels is the conviction that only one’s own world view is good and right. 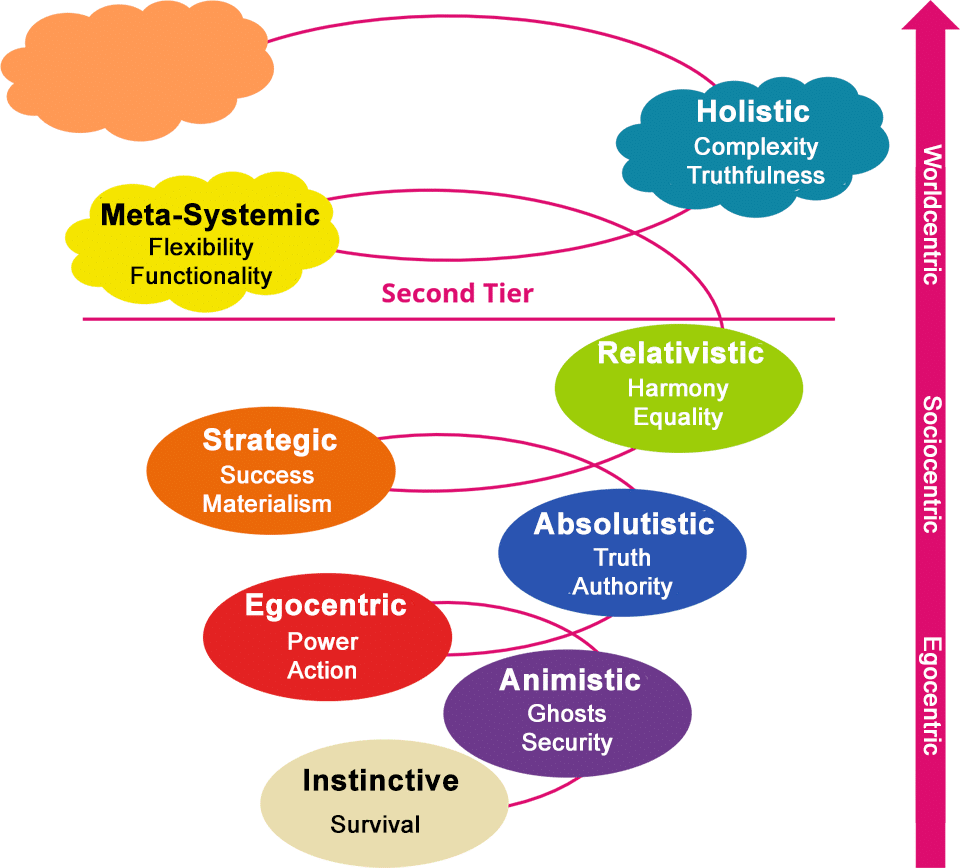 Nevertheless, about 2% of mankind have made the great leap to the second category of consciousness. From the first stage of second-tier thinking, a fundamentally different approach to complexity arises. Complexity is now understood as an opportunity and resource and different world views and ways of thinking can be valued while maintaining one’s own value system.

Second-tier thinking is the solution

Second-tier thinking thus corresponds roughly to what has been postulated for some time under the buzzword “agile mindset”. This includes terms like “focus on value creation and teamwork”, “pragmatism”, “willingness to change” and “continuous learning”.

The transformation, which takes off to a level beyond rationality, cannot possibly be achieved with rational strategies. That’s obvious, isn’t it? So a trans-rational, meta-systemic approach is needed to create transformation.

Second-tier thinking means not only a confident handling of complexity and the connection of different perspectives, but also the ability to see through the unconscious thought structures that underlie all world views. Only if these can be recognised and made visible can they be changed. Second-tier thinking is therefore the solution, but it is usually not understood. In principle, complexity can only be understood on its own or on the levels below. More complex levels are not understood as functional and are therefore devalued and fought against. This is the reason why many decision makers stick to rational strategies instead of applying more complex, holistic strategies.

Failure due to wrong level of abstraction

I would like to give you a concrete example that, although it does not originate in the corporate context, affects over 600 million people worldwide: obesity. Obesity is an expression of the fact that food not only serves to satisfy hunger, but also satisfies other needs. All strategies to reduce weight are first-order changes: dietary changes, diets, sports. They require an enormous amount of self-discipline, which generates negative feelings. At the same time, there is a lack of substitute satisfaction of (unconscious) needs that were previously satisfied by food. Sooner or later people return to their original behaviour because unsatisfied needs can only be tolerated for a certain time. The success rate of weight loss measures is -7%, i.e. people have an average of 7% more weight one year after their efforts than before.³

A functional strategy must explore the unconscious causes of behaviour and create individual solutions for them. This applies equally to private individuals and companies. There is no best practice in complexity! The starting point is always the NOW and the orientation is the vision that one has developed. Visions are pictures, symbols of a feeling that one wants to achieve permanently. A vision must be able to inspire, motivate and connect. This is something completely different from a target state.

You remove an obstacle and observe how the system changes, which aspects emerge. These have to be integrated in order to plan the next step.

Second order changes address the subjective, non-measurable inner dimensions of people (psychology) and organisations (corporate culture) as well as the external, measurable phenomena such as structures and processes. There are four different perspectives, which are actually interacting parts of an inseparable whole that cannot be changed independently of each other. 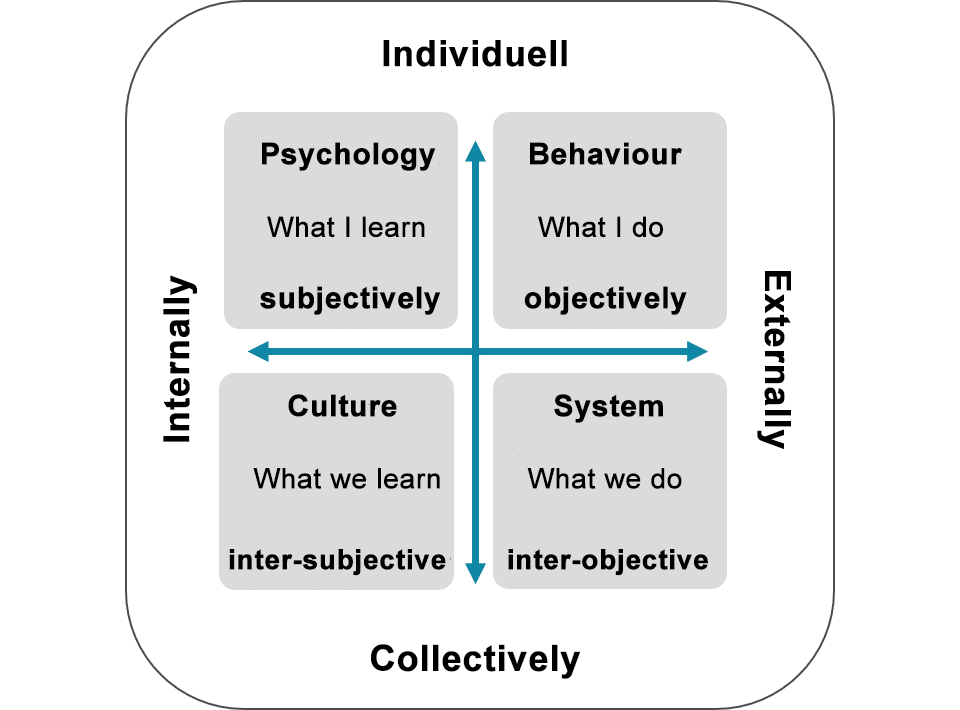 The transformation of mindsets is possible if openness and willingness to change are present. However, it is not possible to transform a person against his will or to control a concrete target state, because that would require a mechanism that does not exist in the realm of the mind. Transformation requires the awareness of unconscious constructions and patterns by a person who has already changed them.

It is primarily an unblocking of restrictive views and confronts a person with uncomfortable feelings and fears, which are however dissolved by this process. The release of suffering is the best motivator for transformation. In addition, the variety of action increases through the development of consciousness and needs that had to remain unsatisfied on the previous level can be satisfied. Each higher level increases the level of freedom from fear, compassion and quality of life.

One should not hide the fact that transformation requires a good deal of courage, because it is impossible to know beforehand what it will be like when an obstacle is removed. But the direction is known, because it runs from selfish, through sociocentric to worldcentric perspectives. It feels like jumping over an abyss and you can’t do that carefully, you have to take a running start. In fact it is only a change of perspective, overcoming an egoism and the feelings of happiness afterwards are worth every effort.

Ideally, managers in organisations start by expanding their thinking structures, because change is best transported by example. Cognitively capturing higher levels of consciousness (e.g. through books like Reinventing Organisations) is not difficult. Living values, even when stressed or attacked, is an expression of true change.

In organisations, the modification of structures and processes makes sense if they address the next higher level of consciousness. This process must be co-creative in order to involve all people. In this way, the interaction of the inner and outer quadrants is used and organisational and consciousness development is achieved simultaneously.

The change from rational to transrational thinking, which enables the sovereign handling of complexity, is not only possible, but urgently needed to create solutions that are appropriate for the 21st century. Making this change requires holistic strategies that have transcended the errors of rational thinking. Change succeeds when it takes place in harmony with the needs of people. The Chinese call this behavior Wu-Wei, acting without fighting. 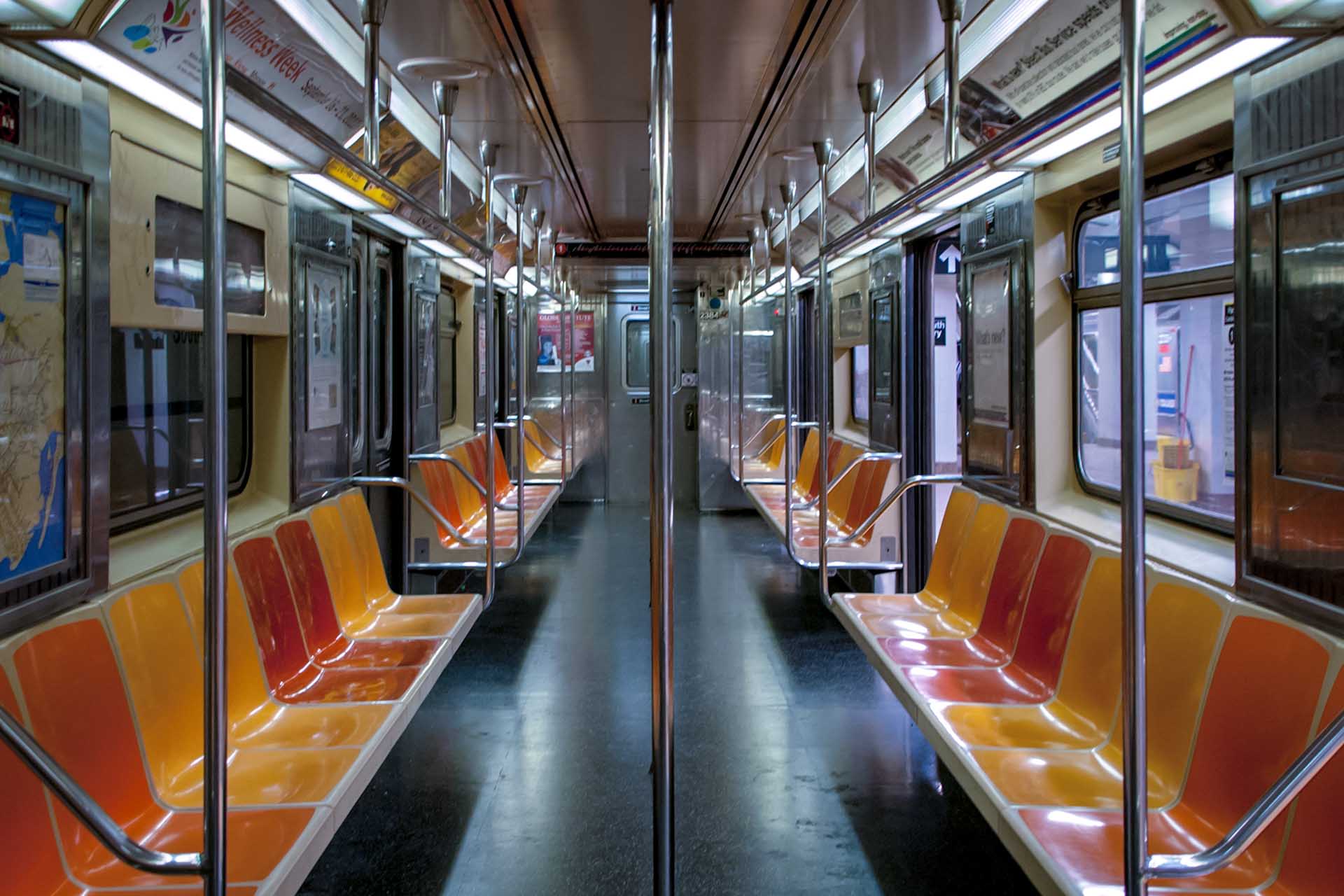 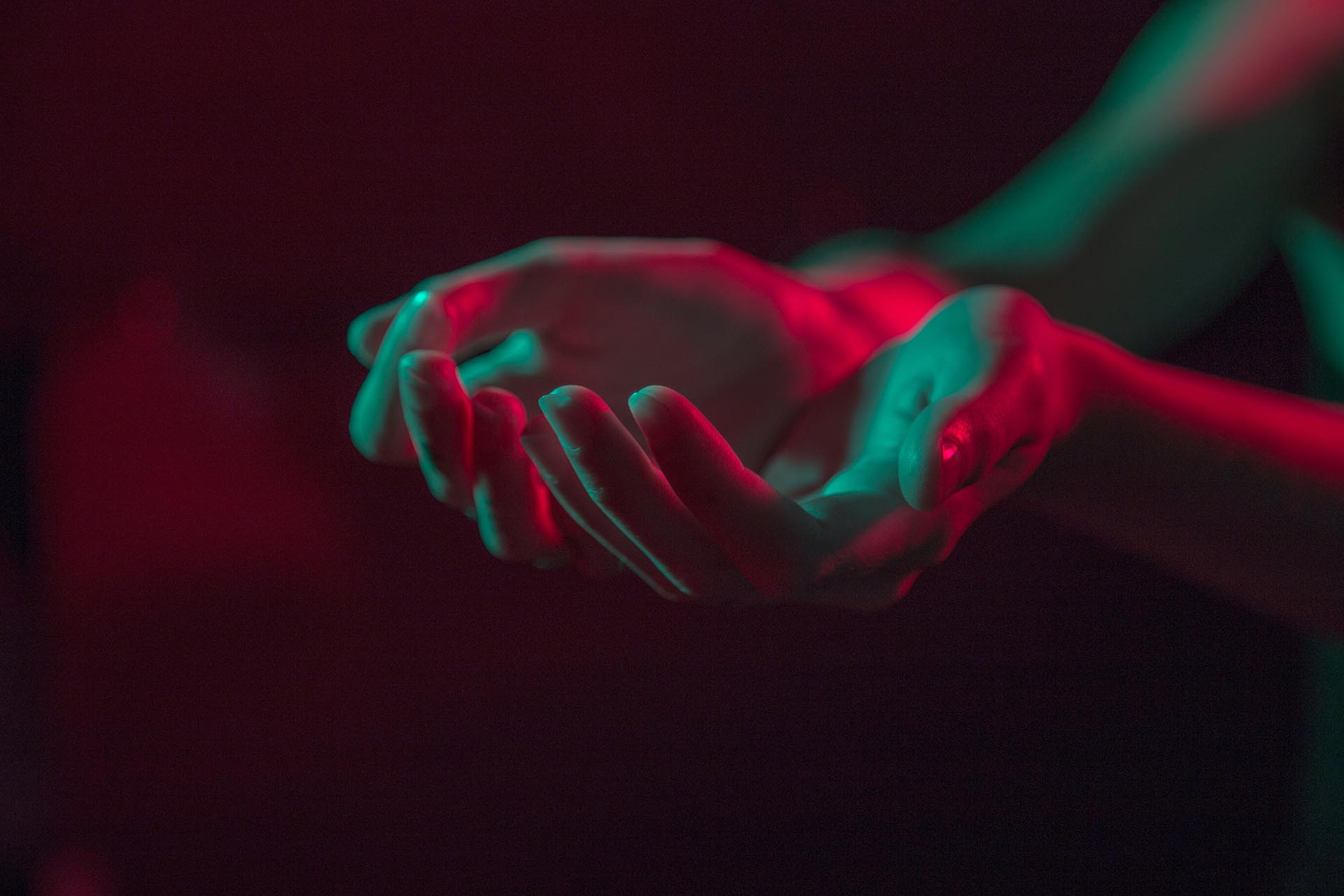 Agile Mindset? I know of something much better! 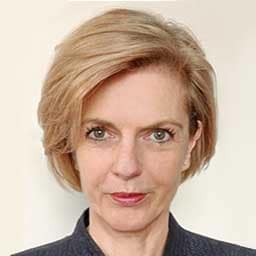 Silke Nierfeld stands for a new quality of future work organisation that adds another dimension to the four P's of modern business development: Profit ∞ Planet ∞ People ∞ Purpose, which causes these goals to be effortlessly achieved and connected.

Her holistic thinking structure integrates the living and non-linear realms of reality, transforming complexity from problem to potential. She identifies reductionist worldviews, unconscious beliefs and resistances that block processes. Integrating prae- and transrational aspects is the key to holistic change management or change without fighting.

Contact Silke Nierfeld if you want to transform your company into a living, sustainable organisation without gruelling change processes.