10 Characteristics of a Digital Mindset

Much has been written about digitisation, artificial intelligence and big data, about bandwidth, innovation and transformation. But one central question remains unanswered in many places: What will be important for us in the future? Which mindset is needed in the new, digital world? And how do we educate our children so that they can survive and be successful the day after tomorrow?

Here are 10 characteristics for a digital mindset that will help us not only in the future, but already today.

#BeCurious! Steve Jobs once said. In fact, it is the foundation for lifelong learning that has never been more important than it is today, at a time when things are changing rapidly. Curiosity also means openness to new, digital topics and a willingness to change that we urgently need in order to break away from old habits.

#Sharingiscaring. Sharing as a mindset is essential as it is the basis for real networking. This applies to the job between managers and employees as well as between friends and families, because I can only trust someone who opens up and takes the first step. Methods such as “Working out Loud” show how networking can also work through the use of digital tools when I’m generous and start out in advance.

We already live in a world where #fakenews can hardly be distinguished from real facts. Only those who are interested in source and context and don’t simply process chewed-up information can form their own and above all well-founded opinion, but the flow of information on the Internet is already taking a lot of people by storm. For reasons of time, often only headlines are consumed. The Swedish statistician Hans Rosling writes in his highly acclaimed book “Factfulness” that our brain actually tends towards a dramatic world view that rarely corresponds to reality.

One should of course also question the status quo in companies. A #wevealwaysdoneitthisway must no longer be accepted blindly today. It is important to understand the new conditions of the VUCA world and to raise new ideas. Steve Jobs called these critics the “Crazy Ones” in his famous commercial in 1997, and aptly added “who have no respect for the status quo”.

“We’d love to have your problems!” The Darmstadt innovation consultants “Quäntchen & Glück” have made this ingenious slogan their motto. Here it becomes clear that problems are always opportunities to creatively develop something new. But this requires a certain hacker mentality. In startup circles one also speaks of “Growth Hacking”, because the question is: How can we quickly reach new goals on new paths? And as a result, how can we work together differently?

To do this, you have to understand that diversity plays a fundamental role in being creative in a team, because only the exchange of heterogeneous perspectives allows new approaches to emerge. Creativity is an attitude that can be adopted by anyone who is dissatisfied with the state of things. Innovation is urgently needed, but can only be conceived by those who have the ability to think “out of the box”.

In order to be creative together, we must be able to put ourselves in other people’s shoes: Why does the colleague tick like he does? What does he expect? In the context of digital transformation, digital pioneers, i.e. early adopters, are often called upon to be empathetic, especially when older colleagues “don’t play along”. Think, for example, of employees who consistently refuse to use the social intranet but continue to write e-mails. Anyone who is empathetic here recognises the reasons for this defensive behaviour, discovers habits and motivations and can thus have a positive effect by explaining the individual added value.

Companies that want to continue stubbornly selling their products as in the 90s and do not ask themselves whether customers are still interested today will be surprised in the future. Banks, for example, are facing the big question: What does the customer want? Do they only want digital banking or do they expect branches? Or both?

That means, of course, that when developing new solutions you have to involve the customer early in the development process and obtain feedback. The renowned trend scout Raphael Gielgen calls this #PermanentBeta, the “never-ending existence”. Products and services are no longer finished today. They are in constant development. You should always bear that in mind.

7. Self-Initiative and Sense of Responsibility

Speaking of further development. Anyone who sets goals and forges a plan, like Michael Scofield in the American TV series “Prison Break”, will not only be successful in the end, but also happy. Even the New Work philosopher Frithjof Bergmann preached self-efficacy in the 70s. In concrete terms, this means that you take responsibility for your decisions, think for yourself and complaints are not an option. In his bestseller “How Life Imitates Chess”, the former Russian chess world champion Garri Kasparov emphasises the importance of using one’s own assets strategically and not looking for excuses if a move turns out to be a mistake. After all, mistakes are not a problem if you can learn from them.

8. Courage to take Decisions and to represent them

It is not always easy to swim against the current and not be bound by social conventions. On Twitter the German Hashtag #Mutanfall (courage attack) has been circulating for quite a while now. Behind this is the idea of “just making it work”, even if others don’t understand or approve of it. It’s worth reflecting on one’s own projects in peace and then leaving familiar territory to set off into an unknown world like the often quoted #heldenreise (hero’s journey). That can be for example a job change, with which one says consistently no to a further co-operation with the past employer. Of course, saying no also means contradicting. This does not always go down well, but is necessary for your own development.

The big used to eat the small, the fast the slow. Today, the agile eat the sluggish, who cannot or do not want to adapt. Technological development is now progressing exponentially as a result of digitalisation, so that no one can predict what jobs will still be available in 20 years’ time, whether cash will still play a role and whether self-propelled cars will dominate our cityscape. However, it is clear that we have to get used to the fact that nothing stays as it is. You can find that good or bad, you have to accept it at the end of the day and look for opportunities in it. New business models emerge because disruptions break old structures and change becomes a constant. YouTuber Casey Neistat sees a big advantage in this: “You don’t have to listen to anyone, because in this new world, no one knows anything.”.

The Germans are not necessarily famous for looking to the future full of optimism and zest for action, especially when it comes to digital transformation. But only those who are crazy enough to believe they can change the world will do so in the end. Anyone who believes that the 4 digital superpowers (#Gafa) have already divided the world among themselves will resign. But those who look ahead with a firm belief in their own success and can look forward to pivots will benefit from digitisation.

Digitisation, which is misunderstood by many observers as mechanisation, requires a completely new mindset in order to see lasting change as an opportunity. Routines that existed in the economy for decades have long since served their purpose. Knowledge pyramids in companies are crumbling, careers are being redefined, new jobs are being created and old ones are disappearing. In fact, we are experiencing a digital revolution that will change our society forever. Schools in particular should focus on “future skills” so that our children will not compete with robots later on, but bribe with creativity, empathy and curiosity. In 2018, Alibaba CEO Jack Ma gave a much-noticed speech at the “World Economic Forum” in Davos, Switzerland. He summed it up in this speech: “We cannot teach our kids to compete with machines. Teachers must stop teaching knowledge. We have to teach something unique, so a machine can never catch up with us. We need to be teaching our children values, believing, independent thinking, teamwork, care for others. The knowledge will not teach you that.”

Further German contributions, talks and videos by Gabriel Rath can be found at https://gabrielrath.com/. 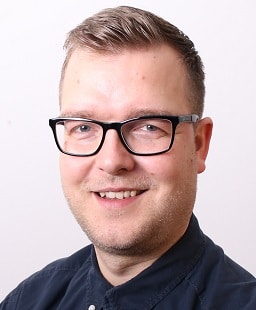 Gabriel Rath, born in 1980, is a social media expert who works as Senior Concepter Digital at the internet agency Mandarin Medien. Previously, he was communications manager at OstseeSparkasse Rostock, worked at the Hamburg agencies Scholz & Friends and DDB Germany as community manager and as marketing manager at a Rostock start-up. In his spare time, the father of two blogs about his life between daddy mode and digital life, performs as a rapper and organises the network event series 12min.me.