Modern leadership: When nothing works as planned

Leadership is not a linear one-way street
No constructive leadership without voluntary followers
Leadership as a dynamic process
Without executives, then?!
What does that mean for the manager?
Conclusion: Each context is complex in a different way

Executives who consciously want to lead differently, in the sense of constructively, often experience one or the other sobering experience in their day-to-day management. Much of what they have set themselves does not work or does not work as they imagine.

In this way, the manager consciously provides freedom for the team to organise itself. And then he despairs of the result, because there is nothing close to what he expected to happen: a highly motivated team that gets going and is successful without control and endless pursuit. So another word of power is spoken. But even this does not lead to better work results. Just as little as the appeal “Now just talk it over sensibly, it’s not that hard!

This dilemma, which many managers experience, has to do with two aspects:

Leadership is not a linear one-way street

Let’s start with the aspect that leadership always takes place in a complex environment.

Complex environments cannot be controlled in the classical sense. They do not follow a linear logic in which a button is pressed on one side and a predictable result is achieved on the other. Anyone who has ever tried to steer a person “logically” has experienced this: reactions and behaviour patterns cannot be predicted. In addition, the complexity is increased by the fact that the entire environment is influenced by things that cannot be planned: Decisions at company level, behaviour of a customer, changing market environments through new players, corporate culture and so on.

For managers, this is precisely the greatest source of frustration: with all good will, things simply don’t go as planned, the team reacts differently than expected, the employee doesn’t jump for enthusiasm. To make matters worse, the time and energy that the manager puts into managing the team is not less, but more.

What can help? To accept exactly this: “My environment and with it the effect of my leadership are complex. Probably I don’t have it under control. And probably that’s exactly what’s normal.”

No constructive leadership without voluntary followers

This basic attitude takes on the unrealistic pressure of expectation and offers a different perspective on one’s own actions. It thus clears the way for a more effective approach that constructively uses the second aspect of leadership: Leadership in social systems does not only take place through the leader.

Leadership develops on two levels. One level is that of the formal leadership power that a person receives from his or her social system. This happens, for example, when someone is appointed a leader or manager and thereby receives the formal power to make decisions for his/her team, implement instructions, set rules and ensure that they are followed.

Leadership, however, is not only about following, but also about wanting to be followed. An idea, a project, an initiative, a thought or even a person. Leadership comes from followers.

Leadership as a dynamic process

Both forms of leadership can create space for ideas and contributions that no one had expected, they can create an atmosphere of appreciation in which the most diverse competencies and points of view are constructively received and used. They can enable intrinsic motivation and personal responsibility.

Leadership is not an immovable construct, but a dynamic process that adapts itself again and again. An idea is rejected once again because it does not bring the desired success after several learning curves? Then we follow the next idea, which seems to us to be worth following.

Leadership always jumps back to where it makes the most sense at that moment (for the social system). A self-organised and highly complex process, influenced by many factors, which can be observed every day. For example, in voluntary associations or networks, in which people devote themselves completely self-organised to a topic, come to an agreement, wrestle with each other for points of view, push things forward together.

Or in well moderated meetings in which thoughts and different perspectives are exchanged. In which ideas are taken up and further developed and sentences like “Sounds good”, “Good aspect” and “What if…?” are repeated again and again. With each of these sentences leadership emerges, is rejected again, remains with some aspects somewhat longer, reconsiders itself again and condenses more and more where the social system suspects at this moment the greatest effectiveness and competence. And in the end everyone leaves the meeting with a good feeling and a high commitment to the matter. Because it was a voluntary, self-organised decision that the participants came to in the end.

Perhaps you are now asking yourself why managers are needed at all if the leadership created by social processes can have such a constructive effect.

Well, leadership, which develops by social processes, can wear itself out in power and interest struggles, it can misdirect itself, because social dynamics lead to the fact that individuals fall silent and contribute nothing more, it can end in openly carried out conflicts, because different interests and needs clash unsettled.

At the same time, leadership created by formal power can suppress other ways of thinking and promote uniformity. It can contribute to the fact that failures and experiences remain unused and that personal responsibility and organisation will slowly but surely fall asleep. It can lead to fear and inner dismissal.

What does that mean for the manager?

“Take the best of both worlds”, that’s how I want to describe it. Where formal power exists through leadership levels (and this is the case in the majority of companies), the combination of these two forms of leadership can help to constructively exploit the full potential of leadership in social systems.

Self-organised leadership can make a difference, enabling you to draw from many different perspectives and take joint responsibility. And at the same time, it is like a delicate plant that will die or be overgrown by weeds if it does not find the right environment. Social leadership needs a context in which it does not eat itself up through social dynamics.

The greatest added value of formal leadership lies in shaping this context. Designing in which formal power is used to set a framework that enables personal responsibility, self-organisation and an exchange of perspectives.

Conclusion: Each context is complex in a different way

A leader who wants to constructively use the inherent dynamics of leadership in social systems can consciously use his formal power and thus create an environment in which leadership dynamically develops in the team where it can make the best contribution.

The fact that this cannot be a patent recipe, but always an individual process, is due to the complexity of social systems. Every person is different. Every team is different. Or rather “every context is differently complex”.

A manager who wants to lead “differently” in this sense supports the social dynamics through conscious behaviour that promotes self-organisation and personal responsibility, for example by taking back his or her leadership role and thereby offering space for other forms of leadership, using his or her formal, hierarchical power to create a protective space in which the team can act as freely as possible and organise itself, thus enabling a culture that ensures personal responsibility, self-organisation and the ability to act, even in complex environments. 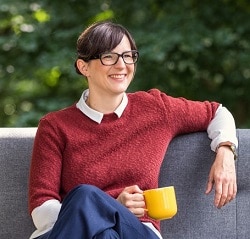 Jo Kristof is the owner of the consulting firm IT'S ABOUT LEADERSHIP. As a consultant, trainer and coach, she advises companies and executives on everything to do with leadership culture, corporate culture and change. What does her consulting focus on? To create an understanding of leadership that creates space for personal responsibility, self-organisation and innovation. What is different at the end of this consultation? Companies and executives develop an awareness of what their organisation needs in order to be able to act for the future.