During the first months at my current employer I was overrun with appointments. I found virtually no time to spend with my team. So after three months I still had no overview of what everyone was doing.

After a short pondering I suggested a daily standup with a kanban board to my team. The first reaction: Silence. And sceptical faces. After a short pause the first question came: “Do you mean a Kanban board, as it is also used to level a value stream?”

The word Kanban comes from the Japanese and consists of two parts, kan= signal and ban=card. In the middle of the 20th century, economic conditions forced Toyota to optimize its production in order to be able to continue to supply high-quality products. Japanese managers therefore developed a new project management system called Toyota Production System with the aim of making production processes less wasteful.

As with the emergence of assembly line production, in which previously interrelated manufacturing processes were subdivided in order to optimise individual processing steps, the focus of the new system was on optimising the overall process and the efficient interaction of the individual manufacturing steps – from the delivery of the starting material to the delivery of the end product.

What does Kanban mean in a lean environment?

A production program for a defined period of time is stored in the Hejunka board. It is based, for example, on the evaluation of previous sales figures by defining average quantities and the number of kanbans for individual materials. These kanbans are then created in the Hejunka board in a defined sequence. The materials are subsequently produced according to this sequence. The average quantities level production so that fluctuations in pre-production decrease. These fluctuations are usually linked to assembly using the pull principle. The result is a self-regulating system, a steady rhythm with considerably more transparency in production.

As a rule, all those involved (production, logistics, quality, maintenance etc.) meet once a day at the Hejunka board and discuss existing backlogs, pre-runs and their causes in relation to the planned programme.

And how does Kanban work in an agile environment?

In agile project management, Kanban is used to better visualise tasks. Kanbans and a Kanban board are used for this purpose. About 2003 this lean method was used for the first time in software development (see Lean Software Development by Mary and Tom Poppendieck). The aim is to better plan, monitor and control project processes – in clearly arranged columns with individual entries that are processed in sequence.

A kanban board has basically three columns with

There is a task on a kanban. Ideally, this task is only large enough to be processed within one day. If a task is larger, it can usually be split. A kanban moves from the left (To Do’s) to the right (Done), depending on the processing status.
Every day, the interdisciplinary team meets on the kanban board and briefly discusses what has been completed and what is being processed on the current day. This way, everyone gets an overview of the project status and possible problems within about 15 minutes. Neither completed nor pending tasks are discussed in detail. It is desirable to look for a solution together or to ask for help in case of problems.

Of course there are some more differences between Agile and Lean Kanban. Here you will find a small summary or comparison:

After discussing an agile Kanban board and the differences that were found, the team decided to give it a try. As an example we started to stick our tasks on a whiteboard. First ideas also developed: “We can use this also for our big project to make transparent where we are in the analysis phase and thus take the whole team with us”. I thought it was great.

With the development of an implementation concept came the first task, which was considerably larger than one day. And promptly followed the objection: “But I don’t write a new card every day!” After a short discussion I suggested to start with it and asked the group: “How do we want to convince others of this approach, e.g. in our big project, if we don’t use it ourselves? Well, no sooner said than done.

In the meantime, we in the team have been using the kanban board for quite some time. In the beginning there were only a few Kanbans, but quickly the board filled up (a positive sign that it was accepted as a tool). After two weeks we already started to hang up completed Post-Its again. Of course, there were discussions about tasks that had been hanging in the WIP for a long time. Recognising this was a big advantage for the team. The team quickly got used to the visualisation and the good feeling when tasks moved to the Done column and didn’t stay in the WIP forever.

During the summer months we decided to let the Kanban Board rest temporarily, since a large part of the team was on vacation. Interestingly, we received a complaint from managers and colleagues: “I don’t know what they are working on right now! A complaint can also contain a compliment.

Even before Corona, we discussed whether we wanted to use an electronic board, and of course the topic is currently coming to the fore. Personally, I enjoy telling everyone briefly once a day what I’m up to and when I’m in the office, I like to do it face to face. And I am sure that Kanban also serves all other team members well.

Furthermore, we have also recognised another advantage: Our new student was immediately enthusiastic. “Cool, that’s a kanban koard. It’s great that we’re using it.” It helps new colleagues to organise themselves and at the same time to see what everyone else on the team is doing. Growing together with the team is a blink of an eye, and getting to know each other is like clockwork.

Herewith I would like to end my little story. Do you have any suggestions as to what can be improved in my comparison or what is still missing? Then please leave a comment. I would be pleased. 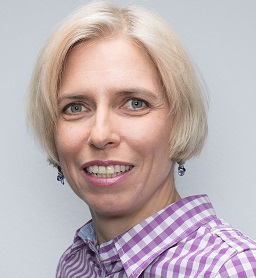 Anja Blesl is a graduate engineer with over 20 years of experience in change projects in logistics, production and lean management. She focuses on the implementation of new topics through impulses and projects. True to her motto “AgileMotion” she likes to move people and keeps them moving through her motivating way. As a sketch artist, she visualizes experiences and is a trainer for brain-oriented work according to Vera F. Birkenbihl. Besides she moderates small and large group events.

Currently she is responsible for the worldwide production system at a global automotive supplier. Prior to that she worked for 18 years for a globally renowned company known as an automotive supplier, manufacturer of industrial technology, consumer goods, energy and building technology.