How interactive beacons could change our lives. A look into the future.

We live in an age in which new technologies are constantly emerging. They change the way we interact with each other. The now famous “Internet of Things” (IoT) represents a major change in our perception of technology and its role in the world. The Internet of Things is a term for a variety of technologies that describe a number of different ways to connect physical things to the Internet. In addition to the technical aspects of interaction, this leads to serious changes in our view of the world. Movements in the real world will have a digital result, and digital actions will cause physical changes. A key component is the so-called proximity. Proximity means that an IoT-enabled object reacts and changes depending on its location. And that leads me to the topic of the article: interactive beacons.

What are interactive beacons?

Interactive beacons are a new proximity technology with which you can interact directly with your environment in the future. Every user, but also every operable device, every functional unit gets its own interactive beacon to trigger, interact and exchange information automatically. For example, a user uses a beacon app to permanently send parameterized short messages to his direct environment and simultaneously receives beacon messages from other users. The result is a communication between all users’ beacon apps that functions locally, directly and in real time with the help of digital terminals. The exciting thing is that no further infrastructure is needed.

Beacons have been used for a number of years, in particular as a localization function in interiors and for marketing measures at the point of sale. Well-known examples are Apple’s iBeacon and Android’s Eddystone, both of which run on Bluetooth Low Energy. Both systems send a special ID locally within their Bluetooth range, whose specification is stored in a database. If a user comes within reach of a beacon, it is recognized by software on the smartphone and the user’s position is thus determined. With Eddystone, a URL can also be sent directly so that the customer is led directly to the offer page of the store in front of whose beacon he is currently standing.

This method, known as the “Physical Web”, of attaching a beacon to smart objects that permanently sends a URL, offers numerous advantages for networking the real and virtual world, but it always requires a viable Internet or mobile phone network.

Today, the possibilities of interactive beacons are not even fully exploited because there is no global standard and consequently no market penetration with the help of the big global players. Unfortunately, the same fragmentation is repeated in the beacon market in beacons from Android and Apple. This is still preventing the big breakthrough, although objectively the Eddystone beacon is considered more future-oriented.

Another form of beacon is the so-called wireless access point in WLAN, which usually sends small data packets with its name (SSID) and other access parameters cyclically as a broadcast via a router. In comparison to iBeacon and Eddystone, the content of the SSID data packet is displayed as plain text across all platforms on all operating systems without any special app. This content becomes visible as a network name among available connections or networks. In fact, I can already use this function as a private beacon to communicate with my immediate environment. My network name “today volleyball 3 pm” is displayed as a message and immediately on all devices within my WLAN range. Answers are also possible in the same way; all you have to do is set up your device as a hotspot and enter your message as the network name.

This procedure also works analogously with wifi direct. Here the device name is displayed as an available wifi-direct device, and as soon as you save the device name as a message, it becomes visible and readable for all devices in the vicinity. Thus, short messages with a maximum of 32 characters can be exchanged with all users in the near environment. A mobile network is not required and no Internet, no app, no mail address, because only the device name or the SSID are sent as in a circular and every user in the environment – regardless of whether he or she is known to me or unknown – can read the content and reply if interested.

An application scenario for an interactive beacon

Let’s take Mr. Mayer. What could Mr. Mayer’s life look like in the future and what could his interactive beacon do for him?

Mr. Mayer travels a lot, he has installed a beacon app on his smartphone and made various presettings. In addition to a nickname, he has entered his favorite temperature during the day as well as at night, his favorite light while working, eating and relaxing, his preferences while eating and drinking, and some information about his multimedia taste such as music styles, movie genre or favorite channels.

When he starts his app, his smartphone sends the set parameters as local short messages depending on time and location, similar to an automatic remote control. In order for his wishes to be realised, any smart home automation system must be able to read the beacon messages and react accordingly, so that the heating, lighting and infotainment in the bedroom, living room or study are set automatically according to his wishes.

It becomes interesting when Mr. Mayer moves into other Smart Home areas that also work with beacons. Although unknown, he doesn’t have to set anything manually there either, because his beacon app ensures that everything in the rental car, hotel room, train, plane, restaurant, at a congress is set according to his personal preferences and that the respective area with all its possibilities such as lighting, heating, music, TV, drinks, food etc. is immediately personalised.

The special thing about this technology is that Mr. Mayer only has to adjust his app once, after which it acts completely autonomously in the background. Of course, he can always change his parameters manually or link them to geodata, so that certain settings only work actively in the background in the office, at home or with his favourite Italian restaurant.

An interesting application would be the memory effect in elevators. The elevator remembers that Mr Mayer got on the 7th floor and got off on the ground floor. If Mr. Mayer returns with full shopping bags, he does not have to press a floor button, because the elevator recognizes Mr. Meier by his interactive beacon and now automatically takes him to where he came from, namely to the 7th floor. And if he wants to go to a friend who lives on the 5th floor instead, he can initiate this as before with a simple push of a button.

Interactive beacons can do much more as an open system. They can be used for local chatting, they help to find people with similar interests or to make contact with suitable professional persons at trade fairs, congresses and other events. Everything you need is already there. The beacons send personal or professional parameters and the parameters of the other users are evaluated. If there is a match, the person can be contacted and, if necessary, a personal contact can be established. If, for example, two people send “solar” as a keyword at a conference, both users can easily recognize that there is another interested party on the subject of “solar”. Time for getting to know each other.

Likewise, with parameters for hobbies or preferences, you can get to know like-minded people in the subway, in the shopping centre, on the beach or in the restaurant. The interactive beacon acts like a small invisible search query to people in the immediate vicinity.

The use of interactive beacons in retail is also exciting. For example, a customer could use his beacon app to digitize his shopping list, which is then sent permanently to retail areas such as convenience stores, shopping centers or pedestrian zones. As a result, the customer receives corresponding offers from the retailers and, if necessary, is navigated directly to the goods. This saves time and makes shopping easier. And this would also be positive for the retailer beyond the actual sale, because with a little artificial intelligence he could offer the customer who is looking for blue jeans a matching top or a pair of shoes. Advertising could finally be played out precisely in real life. Also for such a scenario there is already everything what is needed. 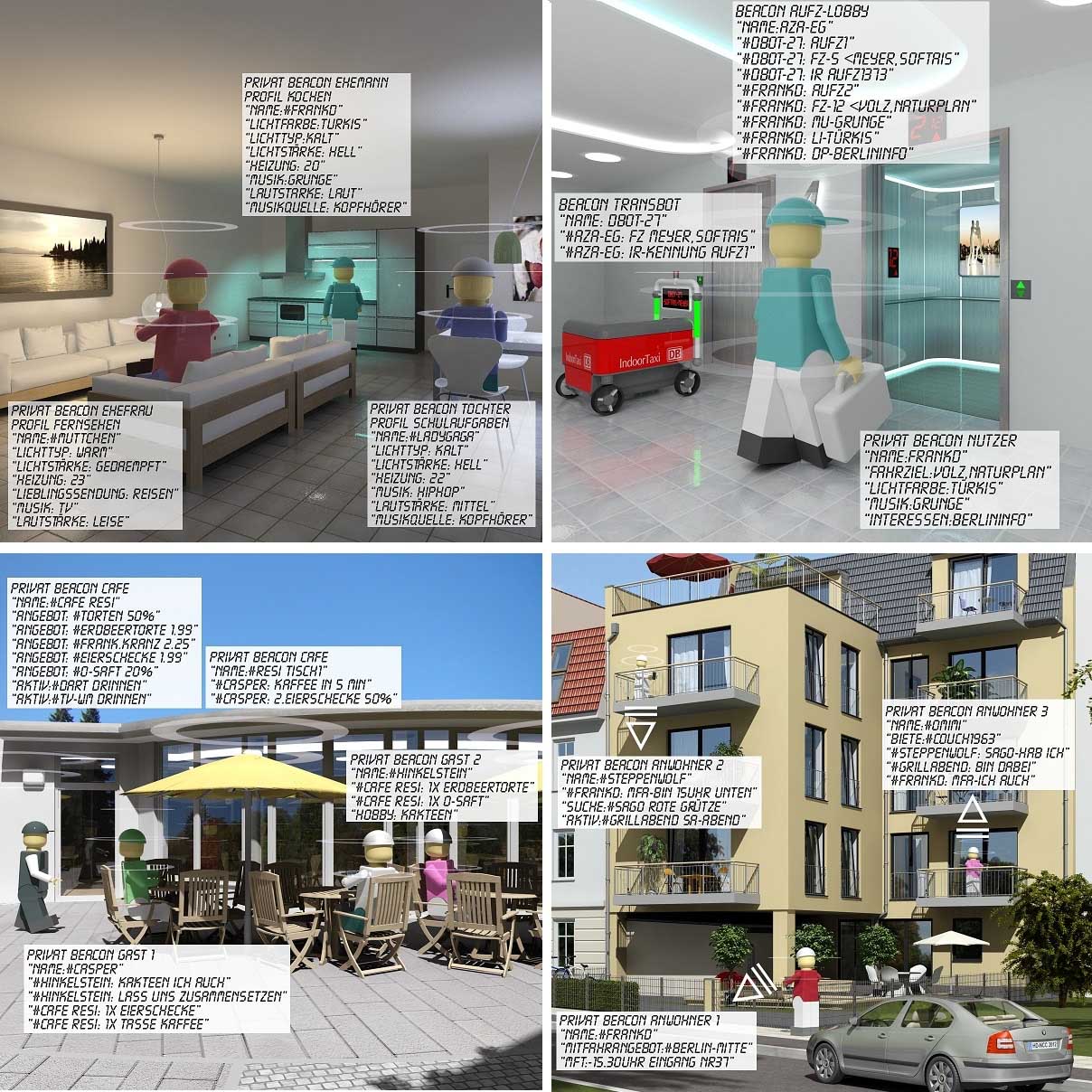 Interactive beacons can be operated in different modes. Let’s take a look at the heating classic:

An active beacon always sends its desired temperature parameter as a broadcast, no matter where the user is located. The user implicitly transmits his presence. The heating then regulates the room to the desired temperature, but only as long as the beacon is active in the corresponding room. Since many unnecessary messages are sent by the beacon, the power consumption is relatively high. This is clearly a disadvantage of active beacons.

With a passive beacon, the scenario is different. Here the user waits with his smartphone for the beacon of a beacon-operated heating system. The heating system has its own interactive beacon, which initially only indicates that a beacon-controlled heating system is operating in this room. The user’s Beacon app recognizes this and only now starts to send the corresponding personal parameters.

Interactive beacons could develop into a new digital form of communication. Establishing contact and exchanging information, targeted communication between customer and salesperson, the interaction between user and building technology – there are already a number of practical examples. Since the use of interactive beacons offers very high scalability, new business models could emerge – especially for location-based applications. Especially in terms of a respectful approach to the environment, a technology is being used that primarily does not require energy-intensive Internet or mobile communications.

A final thought on the subject of security and data protection. With regard to data protection, the use of interactive beacons is very safe, as there is no obligation to enter clear names or to register a device ID, for example. And misuse is also not possible, because the degrees of freedom – in our example the question after: may also “strangers” regulate the temperature? – are defined, for example, in the Smart Home. Of course, a Smart Home system could register such users, but even then only the nickname and ID would be known.

Maybe you noticed: I’m a fan of interactive beacons. 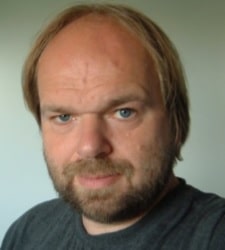 Frank-Holger Dobbert is a graduate engineer for urban and regional planning and has spent many years working on planning concepts and residential area projects. Since 2000, he has been working as a freelance 3D designer specialising in architectural visualisation. His hobbies include cycling and furniture construction; he has made both his professions: in 2012 he founded "Sonnenfahrrad" - a start-up for the development of solar bicycles, followed in 2014 by "Strandkraftwerk" - a start-up for the construction of mobile solar furniture.