At a public corporation in Stuttgart with 400 employees, industrial change and the COVID 19 pandemic forced austerity measures. Revenues were falling away and they wanted to meet their social responsibility instead of laying off staff in the middle of a crisis. Therefore, the organisation decided to reduce working hours for all staff. The reduction in working time required a review of the tasks to be done, because doing the same work with less time does not work without adjustments.

It is true that the organisation had already gained experience with process improvements within the framework of a quality management system (DIN-ISO 9001). But now it was necessary to look at the situation more fundamentally. This was done by means of an “agile task critique”. ValueRise Consulting was commissioned to carry out the task and I would like to describe our approach as well as our experiences and findings.

Task critique – a rather classical approach

The task critique is an established process improvement procedure in the public sector. It consists of

In the purpose critique, one evaluates which tasks are to be fulfilled in the future. The purpose of the execution critique is to increase the efficiency of precisely these tasks. The task critique is usually carried out top-down, with corresponding negative effects on the acceptance of the measures. The costs for external consultants can also be considerable in such cases.

The management therefore decided to conduct the task critique in an agile way. Part of the organisation had already gained experience with agile processes and this was now being built upon. However, the topic of “agility” was viewed completely non-dogmatically. Instead of jumping into certain methods like Scrum or Kanban, they turned to agile principles. In this case, that meant:

To this end, we set up a series of workshops with 12 full-day events.

Online implementation in times of the pandemic

These workshops could only be held online due to the threat of a pandemic. With almost 400 participants, this resulted in workshop sizes ranging from 16 to 87 people. The technical experience of the participants varied greatly. The equipment available with laptops, microphones and cameras was also very heterogeneous.

We decided to use the tools Microsoft Teams and Mural. To prepare our task critique, we created a virtual scavenger hunt on the virtual whiteboard. We also empowered a small group of staff in the use of the video application and offered preparation sessions to all staff in advance of their respective workshops. Many gladly accepted this offer. Unfortunately, we still had to spend about 30 minutes on technical empowerment in each workshop because of recurring problems. Some participants had foregone the preparation, some had an outdated programme version at hand and sometimes we stumbled across expired licences, as these were only automatically renewed if they were present in the office, but due to the constant home office many employees were hardly ever on site. All in all, however, the online workshops worked very well and brought the hoped-for results.

Extensive support from the organisation

The organisation took the issue very seriously. This was evident through support at three levels. Firstly, the management at all levels up to the CEO provided support by communicating and exemplifying the willingness to change. Secondly, there was a “Task Criticism Working Group”, which was primarily concerned with coordination, documentation and communication. Thirdly, there were six internal facilitators who actively supported the workshops after a short training phase. They were also indispensable in the preparation. They made sure that all staff came to the workshops informed and with initial ideas. Those who wanted to do so also received a technical introduction from the facilitators in advance.

Workshops with all staff

The twelve full-day workshops of the task critique all followed the same pattern. The actual work was done in small groups with a maximum of five people. In the whole group we shared results and information. This way, more introverted people also had their say and their ideas were not lost. All group results were documented on a shared digital whiteboard so that nothing was lost through group dynamics.

The agenda of the workshops was always identical:

While ValueRise was the main facilitator of the task critique, the internal facilitators in the small groups took care of keeping the focus high and sprawling discussions low.

The engagement with the strategic guiding principles fulfilled two tasks. On the one hand, valuable feedback was collected that actually led to a sharpening of the guiding principles after the workshops. On the other hand, we ensured that all employees always had the strategy in mind when developing their proposals. Identifying the most important tasks ensured transparency and appreciation, because often the colleagues did not even know from each other which tasks they did every day. The least important tasks were the potential candidates for deletion. Some participants found it difficult to name them, but in the small groups they almost always succeeded. In some cases, however, the participants in the small groups could not agree and then included the corresponding points in the “no consensus” section.

Finding optimisation ideas, on the other hand, was easy and a large number of quick wins were also found. We defined a quick win as a suggestion for improvement that could be implemented by one department alone within a maximum of three months. We gave the responsibility for these quick wins directly to the employees concerned instead of to the managers. This was new for some departments, but it created a whole new dynamic. Some suggestions for improvement were implemented even during the respective workshop.

We optimised the workshops more and more in the course of time by conducting a retrospective as facilitators after each implementation. For example, we quickly learned that we could not let the managers and their staff work in the same small groups. On the one hand, the staff then said less and waited for their bosses before speaking up. On the other hand, the managers felt the need to think strategically about tasks (e.g. setting up a central shared service for an area of concern), while the staff were very operational (e.g. getting rid of coffee brands). We solved this particular case by keeping the managers in the same workshop as their staff, but letting them work in parallel in their own small group.

In the workshops, the staff came up with 257 ideas for deleting tasks, 768 efficiency improvements and 345 quick wins. The workshops also strengthened team spirit and the will to change. The vast majority of staff were highly motivated and willing to help shape major changes.

The processes for continued task critique at the departmental and overall level have been established and can be supported by the trained internal moderators. Quasi “along the way”, we were also able to significantly increase the technical competence of the entire staff.

However, there is still the risk that the willingness to change could quickly decline again if the employees feel that their ideas are not being implemented. This concern has been expressed many times. It must now be countered with openness, transparency and active communication as well as visible improvements.

We succeeded in implementing the classic process of task critique in an agile way. In doing so, we involved almost all of the four hundred employees and made them participants instead of just those affected. This was done with great appreciation and a focus on the needs of the employees. Small steps were worked out in the quick wins, larger levers were also identified. All this was done with minimal use of external support.

True, the organisation is not yet agile. However, it has experienced an agile approach for the first time, is living it in the task critique topic area and has thus created the basis to become even more agile in the future, if it wants to.

Would you like to learn more about the topic? Then download the free German case study, arrange a free initial consultation or attend one of our training sessions. We look forward to hearing from you! 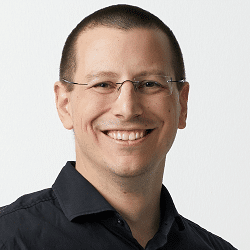 Dominik Maximini’s speciality is cutting big problems into small slices and solving them together with those affected. This works particularly well when sparring at eye level with development managers and other executives. Dominik has been in the agile world for more than 14 years. He is not only a leader himself, but also supports his clients as an agile coach and trainer. Honest, edgy, pragmatic and to the point.